Our first pair of articulating wings were made for a performance by the band Camila at the 2011 Billboard Latin Music awards show. While Camila performed the song ” Entre Tus Alas” a beautiful woman wearing the wings gently moved them back and forth while descending from above the stage, then landing onto a grand piano.  As the song ended she wrapped her wings around the band in a Angels hug! 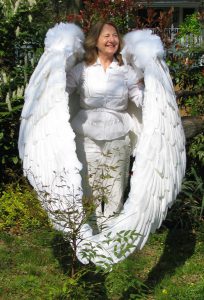 16′ wings ready for a angelic hug

They were humongous wings with a 16 foot wings span, and were quite heavy as a result. Luckily the woman wearing them had great upper body strength and was able to manipulate the wings well!

Since then, we have made many articulating wings for performances and for personal use. As with all our products we continually strive to make improvements. We have improved on the way we hinge them, the angle of each hinged section, and the feather layout around the hinged areas. The feather layout is the most important part! While you want the wings to look realistic and beautiful, you can’t allow the feathers to impede the wing movement. I love it that these wings don’t require an air compressor, servo motor, or any complicated mechanism to operate. Simple movements of the body make them operate!

This site uses Akismet to reduce spam. Learn how your comment data is processed.